One of the biggest mental struggles I think anyone tries to cope with when they are struck with a life altering event is the “how’s” and “why’s.” I know I ask myself that question and I’m not sure I will ever stop. “How did this happen to ME?” “Why did this happen to me??” It’s hard not to wonder if something good will ever come out of the situation. And, of course, it is not something that you can plan for. Or can you?

Was I actually psychic in my ability to plan for my near demise? No. Actually I was quite vain, obsessed and preoccupied. “How so?” You ask. Let me take you to my past.

You see, as only some of you know, I was obese. As a child and teenager, I was heavy. At one point, I topped the scales at 215. I won’t go as so far to say I was terribly unhealthy. I ate healthy foods, just too much of them. And I exercised regularly, but not to an intensity necessary to lose that kind of weight. It wasn’t until my senior year of college that things changed for me. There were several events that I think contributed to the lifestyle change. I met my darling husband who was a college track runner and coach. I worked that summer as a CNA at a local hospital and I was/am an Oprah fan.

Oprah in one of her many televised attempts at losing weight, spoke one thing that worked for me. “Take all the food you think you will eat at a meal,” she said, “but only eat half of it. If you are still hungry after that half, eat a little more and re-evaluate as you go. You will be surprised at the point at which you are really full.” So I took that to heart, and it worked for me.

CNA’s work HARD. They are a nursing assistant if you don’t know the acronym. They do much of the “hands on” care that nurses (don’t wanna do- did I say that?) don’t have time to do. I worked on a telemetry unit and sometimes would have the entire floor of patients to care for. This meant that I needed to have everyone bathed, fed, watered, bed changed and any other tasks as delegated, such as a code brown (big ol’ poop). Also, if you know me, I’d like to think that I have a pretty good work ethic. I made sure everyone that I cared for, got care. This meant, if I didn’t get lunch so be it. Or sometimes lunch was some pretzels. For some reason, nurses are like this. We put ourselves on low priority. But in this case, I lost a lot of weight. Yay me!

Then there is my darling husband. He is a fabulous coach. He ran with me every step of my first run. We would run around the Co-rec at Purdue and I was a big grump with every step. He just kept going with me. Soon one mile turned into two and three. It also helped me that he would share dessert with me 🙂

That is the story of how I became more healthy. I continued it through out my adult life and pregnancies. I trained and ate “rabbit food.” I liked it! Darling husband would often joke we ate vegetables with our vegetables. I knew what things irritated my body, coffee, soda, sugar and I limited or eliminated them. I worked out everyday. I now know I was building my reserves.

I worked out Christmas Eve, the day before I went to the ED for the first time. I worked out when I was healthy enough through my illness. What I wouldn’t do to take a walk now! I probably don’t eat as healthy as I once did, but I still enjoy a good kale salad and fresh fruit when I have the stomach for it. I believe it was these reserves and mindset that helped me to live through this horrendous disease.

My body survived chemotherapy (that stuff really sucks) and several severe HLH flares that left me feverish and in pain. I had a septic joint and an operation to remove it. I gave up my spleen. I had at least two pulmonary embolisms and now have chronic thrombosis. A massive GI bleed requiring 14 units of blood. Delirium. A bone marrow transplant that saved my lie, but is no easy feat in itself. Many times when doctors first met me they were cautious (aka scared) due to the length of diagnosis list. Fortunately they were happily surprised. I know Dr. Superwoman had several ‘oh shit,’ moments with me. My body could cover up the disease until I was REALLY sick. And I attribute that ability to my reserves. My level of health before I became ill.

When I first became ill, i know some people used my level of health as an excuse not to do anything. “Well, look at how healthy she is and look what she got? What’s the point?” They continued to be sedentary, soda guzzling, “what’s a vegetable,” smoking people. Good for them. But honestly I think when push comes to shove, they won’t have the reserves to pull themselves through a serious illness and they will continue to have micro damage with every unhealthy thing they do. Age and health will catch up with them. Their bodies are constantly detoxing themselves. That’s just my opinion.

So now I am rebuilding my reserves. And my reserves have new components to them: spiritual, emotional. I would ask you how are you building your own reserve? I’m not saying you need to exercise everyday, pray excessively or eat only tofu! I’m asking you what is the one thing that you can change today to give yourself a better chance at a fight? Decreasing your soda intake, decreasing your cigarettes, having a meatless day, taking your medications as prescribed, talking with your spouse, working with a budget? Don’t try to change all at once, but I am begging you DO SOMETHING. Be in control of what you can be. So that when the uncontrollable comes knocking at your door, you have built your safe house. You have some reserves. 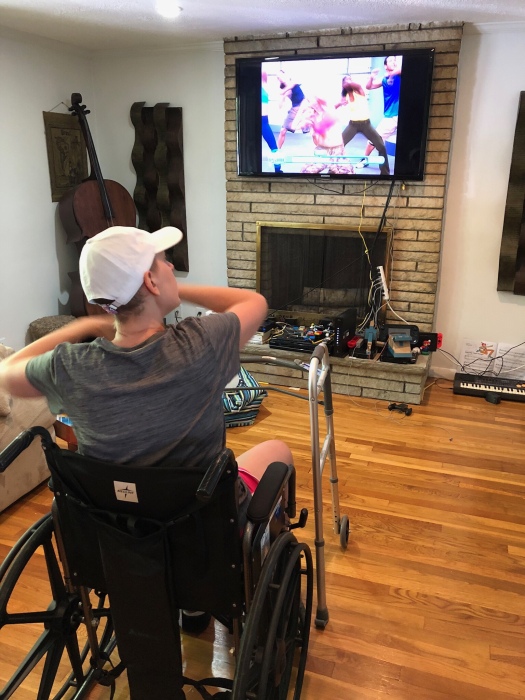 Just in case you want to know, information collected for any fundraising activities will never be shared with anyone. If you have any questions, please just contact me.
Follow Glittered Path on WordPress.com